Nancy M. Siew was a Federal Government public servant before her retirement; her career spanned over several decades, serving various sectors of society. Appointed by the Governor-General-in-Council in 2014, she completed her public service for three years as a Citizenship Judge. She is currently serving on the Senate of Military Police Regiment.  In 2018, she was appointed by the Governor-General to the role of Honorary Lt-Colonel of the Canadian Military Police Academy.

A fourth-generation British subject in Hong Kong, she is proficient in both English and Chinese. With relatives in many countries, she has the best of both worlds:  she is well-versed in Asian cultures and European lifestyle.  Educated in Canada, Hong Kong and Switzerland, Nancy earned five post-secondary diplomas/degrees, including a Master degree from McGill University (Montreal) and  a Diploma of International Etiquette and Protocol (Switzerland).  She hopes to share her knowledge and experience in social skills and interaction which are bonuses in a fast-moving world.

A grateful immigrant to Canada, she devotes her time giving back - particularly in areas of diversity, mental health, veterans and seniors.  Having been a volunteer for over thirty years, Nancy was conferred the Queen’s Diamond Jubilee Medal and theQueen’s Golden Jubilee Medal for serving the community.  In 2020, she was awarded a Commendation by the Minister of Veterans Affairs Canada for her dedication to Canadian veterans.  She is married to Ivor Ladd, an IT executive from Vancouver.  They now reside in Ontario. 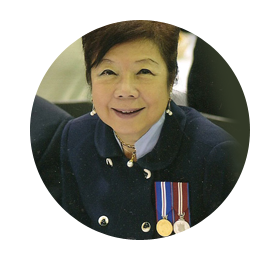